At Greer Enterprises, we know that our employees are a very important asset.  As such, we proudly celebrate significant anniversaries.  This week, we celebrated two employees that reached their 4-year work anniversaries.  We love seeing our employee retention rates rise.  We see this as an indication that we treat our employees fairly and provide an environment that not only fosters, but rewards personal growth.

Project Manager and Transportation Manager with Greer Enterprises.  She has been with the company for the last 4 years but she also worked with the company for almost 2 years previously.  Mary is instrumental in the management of customer waste streams.  She also oversees all transportation activities that occur in support of managing our customers’ waste.  You can view Mary’s full bio here.

Nick Baker (pictured to the right with Managing Member Craig Greer) is the Controller and head of administration at Greer.  He also serves in other miscellaneous capacities such as IT, Safety and HR.  You can view Nick’s full bio here.

Employee retention and tenure can have a very significant impact on the efficiency of a company’s operations.  According to a study by the U.S. Department of Labor from 2016, the median employee tenure in the U.S. is 4.2 years (see full news release here).  This statistic was down from the 2014 figure of 4.6 years, according to the study.  Our median employee tenure here at Greer is slightly higher than the average at 4.5 years.

There is also a common belief that there is a trend 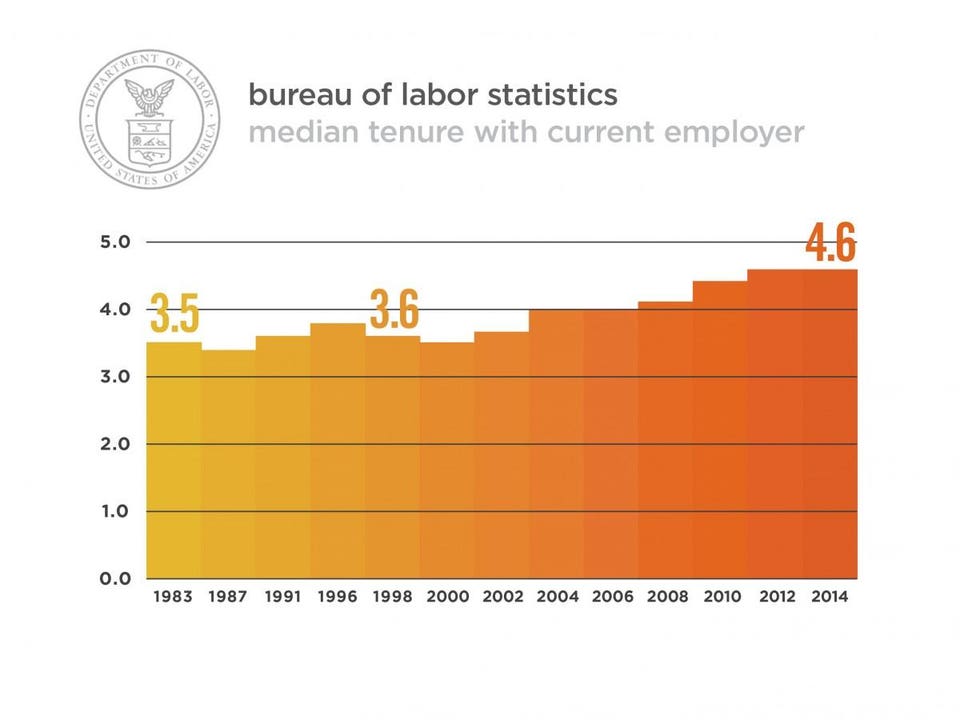 toward “job-hopping” with younger workers.  This chart (to the left) shows that long-term overall tenure rates have increased significantly since 1983. Even though the number fell in 2016, the overall long-term numbers are on-the-rise.

This chart was taken from an online article from Forbes.com that put the belief that job hopping is the new norm to the test.  The article argues against this prevalent belief.  It also states that, “the study also showed that celebrating an employee’s career achievement is strongly correlated to increased tenure” which is why we at Greer Enterprises choose to award employee tenure milestones.

Furthermore, the article states that 79% of employees in one survey stated that they quit a job due to “lack of appreciation”.  Many studies show similar results.  While employees are staying with employers longer, there is an increased need for efforts by employers to both reward and recognize employee achievements.  We have instituted many programs with the goal of making our employees feel appreciated for the hard work that they provide.  It’s a win-win situation for all and we are proud of our employees!