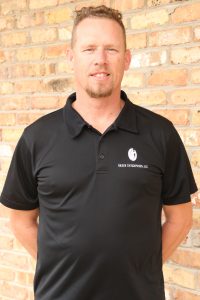 Chad Merrick is an integral member of our transportation department.  He serves on our team as a CDL Driver and has developed his knowledge of the industry very quickly.  This week, Chad hit his two year anniversary with Greer Enterprises and we look forward to many more!

Prior to becoming a team member, Chad served in the United States Coast Guard for a total of 19 years having been stationed at Coos Bay, Oregon, San Francisco, California, multiple locations in the state of Texas and here in Mobile.  Chad’s experience in the USCG as an aviation maintenance technician provided him with a solid foundation of equipment operation knowledge, which he has brought to the team.

After leaving the Coast Guard, Chad set the goal of obtaining a commercial driver’s license.  Having grown up with close family members in the trade, Chad successfully attained his goal and has proven his effectiveness while working here at Greer Enterprises.  He has also attained hazmat, tanker, double and triple trailer endorsements on his CDL.  Chad has a fantastic work ethic, a great attitude and he has been an excellent addition to the transportation team.

Chad is originally from New Mexico but decided to stay in the Mobile area after leaving the Coast Guard.  In his free time, Chad enjoys boating, mountain biking, taking his dog hiking and volunteering at local animal shelters.